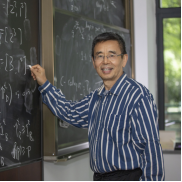 Bio: Yongbin Ruan is a professor at IAS of Zhejiang University, currently. He is a world well-known mathematician who was selected as an Academician of the Chinese Academy of Sciences since 2021. He works in the field of Symplicit Geometry and Mathematical Physics. Prof. Ruan was the founder of many famous theories in mathematics, like (orbifold) Gromov-Witten theory, relative Gromov-Witten theory, Chen-Ruan cohomology and Fan-Jarvis-Ruan-Witten theory. He has made a lot of contributions to the resolution of many famous conjectures, like Arnold conjecture, the generalized Witten conjecture and LG/CY correspondence conjectures.

The fundamental object of Gromov-Witten theory is the notation of stable map to a target Kahler/Symplectic manifold.

In LG A-model in physics, the target carries an additional $C^*$ action called R-charge. It twisted the notation of map in so-called gauged linear sigma model. Furthermore, its moduli space is noncompact even with stability condition. In the talk, we will  introduce the notation of $R$-map. The effort to compactify it leads to the theory of Logarithmic R-maps. This is a joint work with Qile Chen and Felix Janda.